A friendzone is a zone where one person has romantic feelings for the other person, but the other person doesn’t feel the same and they just pretend to be friends with each other. You can say one person has feelings that are unrequited. Nothing hurts more than the feeling of being unloved and being friend-zoned by the person you like the most. But obviously one can’t love many girls at the same time so they take the advantage of friendzone.

You often ask yourself a question “How to friendzone a girl?” if you have more than one female friend who has feelings for you. It is not possible at all to be with every girl who has feelings for you. But at the same time, you don’t want to lose them, so all you can do is to friendzone them. Girls are the most sensitive and possessive when it comes to the person they like. They easily get attached and rejection is almost unacceptable for them. So you need to be very clear that you are solely interested in friendship, and not in a romantic relationship. 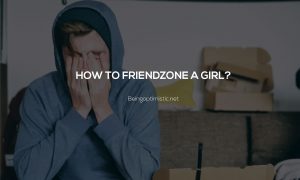 This article will tell you “How to freindzone a girl?” without hurting one’s feelings.

How to Friendzone a Girl? 10 Nicest ways 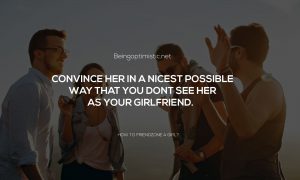 2. Be Straightforward: Being straightforward is the second golden rule to understand “How to friendzone a girl?”

Always remember that “Honesty is the best policy.” Things which are done with honesty are much better than those done with lies and lame excuses. Just explain to the girl honestly that you consider her only your good friend and nothing more than that. Obviously nobody wants to remain in false hopes and lies so just tell her immediately that you can’t offer her anything except your friendship. But while doing so don’t be rude to her. Your words can hurt her more than the fact that you don’t have same feelings for her like she feels for you. Therefore, use soft words with clear meanings. Words that don’t give her any doubt or hope but clarify your point of view.

Obviously listening this will hurt her and she’ll suffer. But with time she’ll overcome all the stuff and at that time she’ll realize that you did this for the betterment of you two. Because in the end bitter truth is always better than sweet lies.

how to not care what people think of you? 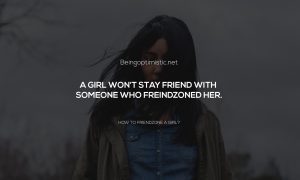 4. Don’t flirt with the friendzoned girl: One of the most important rule of friendzoning a girl is that don’t flirt with her. Never make her feel special or treat her different from others. Don’t compliment her on every little thing so she might confuse it with the fact that you like her. When you know that this girl already has feelings for you, then keeping a distance is always safer. Always talk to her nicely but don’t confuse the word nicely with being romantic. Girls mostly observe every change in your behavior, so don’t give her any kind of sign so she might think you are into her. Because girls think that if you are talking to them nicely, it means that you like them. So don’t be so lenient while talking to them and also don’t behave rudely.

5. Respect her feelings: Though you don’t have any feelings for that girl but being a real gentleman try to respect her feelings. Don’t speak to her rudely but try to explain your point of view in nicest possible way. Always keep in mind that it isn’t in your hand to decide whom to love or not, you can be distracted by your own heart. So that poor girl is not at fault for liking you. Being a gentleman you have to deal with her nicely without breaking her heart. Don’t ignore her completely if you’re sitting in a gathering.  Don’t avoid her completely while talking to other girls. Respect her feelings, don’t make her regret about her choice and this will also portray your positive image in her opinion.

6. Talk about other girls with her freely: If you don’t want to sound rude and mean this point is definitely going to help you in freindzoning a girl. Girls don’t want to hear about other girls from the person they like. So talking about other girls in front of her will automatically give her signal that you are not interested in her. You can share with her about other girl that “she is my crush”, hearing this is of course unpleasant and hurting for her. But discussing your nearness with other girl in front of her will give her hint that you consider her just a friend and nothing more than that. Doing this will save you from using harsh words, and it is the best way to send her signal of your non interest in her.

8. Don’t make friend zoned girl feel bad: Nothing hurts more than being rejected by a person you like. So when you friendzone a girl make sure you don’t make her feel bad about her choice. Obviously, she would be ashamed after being rejected by you. Don’t degrade her further by talking badly about her. Respect her feelings and don’t make fun of her in front of others. Doing this will obviously portray your positive image and she’ll consider you a real gentleman. Always portray her positive image if someone asks you about her. Introduce her as one of your good friend in front of everyone so she doesn’t feel embarrassed.

9. Don’t text her often: Don’t text friend zoned girl constantly. Sending messages will give her a signal that you’ve feelings for her or she can also consider it as flirting. As you’re trying to friend-zoned her, sending her constant texts will mess up all things. Always talk to her nicely. Don’t send her long paragraphs and try to explain your point of view in short words. Obviously don’t cut her off completely, ask her how she’s doing, and share her jokes and memes with her. But that too within limits. Don’t send her romantic messages and try to be flirty, it’ll make things difficult for you. Waiting for your text every time will frustrate her and eventually, her feelings for you will fade away.

10. Tell her she’s like your sister: Hearing this from your crush isn’t pleasant at all. And obviously, this is not something a girl would like to hear from the guy she likes. But if she is constantly ignoring your all signs of friend-zoning her, then doing this is necessary. Some girls are really stubborn by nature and it is important to cut off these kinds of girls. If she’s giving you a tough time despite your efforts of friend-zoning her. Just tell her that she’s like your sister. Hearing this from you will hurt her but it will also make clear that there can be nothing between you two but friendship. She’ll obviously don’t like to be with someone who sees her as a sister.

Friend zoning a girl also requires you to be a real gentleman. Be honest, stay straightforward, and always give value to your words. If you are going to friendzone her then mean it. Your words reflect your personality. So don’t use harsh words and try to convey your point of view in polite words.